The past two weeks have been great for SAISA teams and the conference as a whole. We’ve seen strong performances from SAISA teams in big events out of conference, teams qualifying for SAISA Champs in both divisions, and new and younger SAISA teams participating and helping to grow our conference.

In week 6, SAISA held the final weekend of conference points events. From sunny St. Petersburg, Florida, SAISA South Points #4 saw light conditions matched by a determined race committee chaired by SAISA alumnus Kevin Reali, ESQ. With 14 squads on the water, the home team Eckerd College Tritons jumped out to an early lead and never looked back despite strong competition USF and Miami. With the regatta win, the Tritons secured first place in the South Division for the fall season jumping two spots over Jacksonville University and the University of Miami. Together with the Fins, Hurricanes, and Tritons, the Bulls of USF, the University of Florida Gators, and the Florida State Seminoles each qualified for SAISA Fall Co-ed Conference Championships. Here are the final standings for SAISA South.

In the north, teams descended upon Lake Lanier for SAISA North Points #4 hosted by Georgia Tech. Favorable conditions greeted sailors on Saturday morning and the Clemson University Tigers dialed in a wire-to-wire regatta win. A highlight of the Tigers’ win was the performance of Jenn Casey and Hannah Oswalt winning B-division and securing the Week 6 SAISA Sailors of the Week honor. In the battle for second, a close contest between the NC State Wolfpack and the host Georgia Tech Ramblin’ Wreck came down to the final race where the squad from Raleigh edged out the home team with a final race bullet. This regatta was a nice return to the water for the Hurricane Florence-impacted UNC-Wilmington Seahawks who finished their first regatta of the season in 4th. For the North division, the College of Charleston Cougars secure a berth to SAISA Fall Co-ed Conference Championships finishing the season first in the division, followed by the Clemson Tigers. With a 2nd place at North Points #4, NC State jumps two spots to finish 3rd in the division for the season followed by Univ. of South Carolina, Georgia Tech, and the University of Georgia, all of whom qualified for Champs from the North Division. Here are the final standings for SAISA North.

Week 6 was a busy one for SAISA teams traveling out of conference. In Providence, Brown University hosted the Showcase Women’s Finals where the College of Charleston and the University of South Florida competed against women’s teams from NEISA, MAISA, and PCCSC in cold and shifty conditions on the Providence River finishing 10th and 16th overall respectively. While just a few clicks north, Boston University hosted the Showcase Women’s Final B where SAISA’s Jacksonville University Fins and Eckerd College Tritons competed against NEISA, MAISA, SEISA, PCCSC and MCSA teams on the always-unpredictable Charles River. With a strong start, even leading the regatta, Jacksonville finished the event with a third-place podium finish followed by Eckerd in 11th. 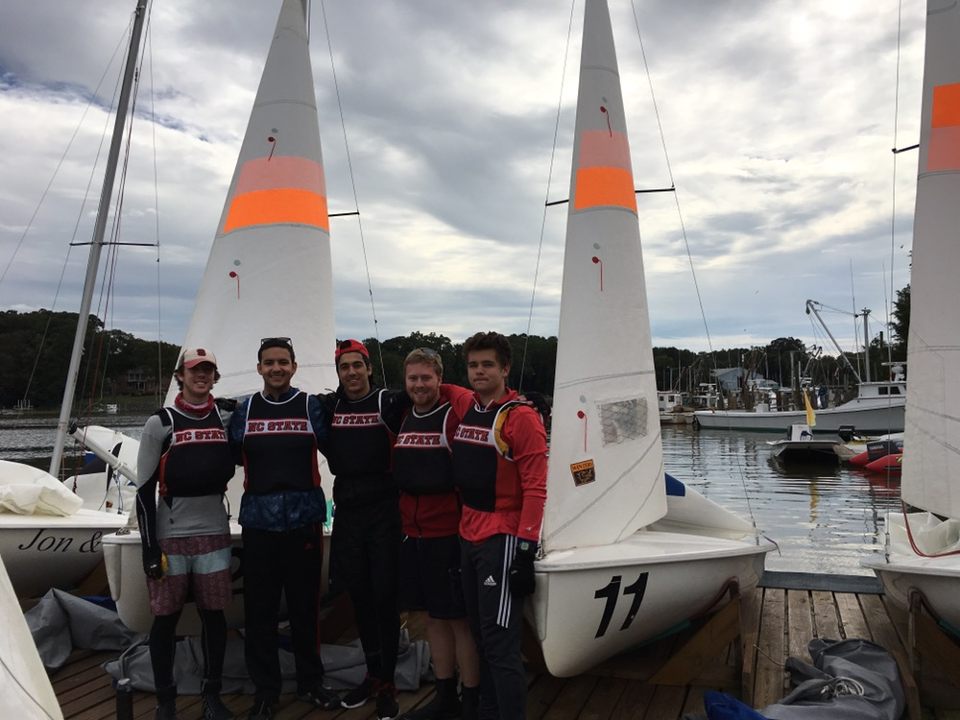 In MAISA territory, the College of Charleston competed in the inaugural Oyster Bowl Regatta at St. Mary’s College of Maryland where the Cougars won both divisions of this regatta sailed in two separate combined fleets. Just down the road in Newport News, Virginia, NC State competed in the Webb Trophy Regatta hosted by Christopher Newport University where the Wolfpack finished 5th overall in this combined fleet regatta.

In keelboat racing, the College of Charleston competed in the annual McMillan Cup Regatta at the US Naval Academy. Sailed in the beautiful Navy 44 yachts, the Cougars were the only non-military school in the competition and completed the two-day event in second place overall. Just a short distance up the Severn River, Navy also hosted their annual Small Keelboat Invitational where SAISA sailors from the University of Georgia and NC State raced Colgate 26s against teams from NEISA, MAISA, and MCSA finishing 8th and 10th overall respectively.

Week 7 was a relatively quiet weekend in-conference with only one event on the calendar, the Rollins College/SAISA Developmental Regatta. In it’s first year on the schedule, the host Rollins College Tars welcomed teams from across Florida to picturesque Lake Virginia including USF, New College of Florida, and Florida Tech. Even with light conditions, the event which is a part of a conference-wide initiative to provide more racing and learning opportunities for developing teams, was a success. With six races in each division, the USF Bulls secured a regatta victory followed by New College and the host Rollins Tars. A noteworthy 2nd in A-Division from the Florida Tech Panthers is a highlight for this young program. Thanks to Coach Herbster and Rollins College for putting on a great event. We look forward to seeing this regatta grow in years to come.

Out of conference, SAISA teams faced fierce competition in interconference action. In blustery New Haven, sailors from the College of Charleston and the University of Miami squared away against teams from both NEISA and SEISA at the Yale Women’s Regatta. Starting the regatta off right, the Cougars secured a bullet in the first race of the day in A-Fleet, and continued to remain near the front of the fleet for the remainder of the day finishing the event in third a point ahead of Harvard. Further along the leaderboard, the Hurricanes from the University of Miami, traveling more than 1,300 miles to reach New Haven, found themselves in a tight battle with the newest varsity program in college sailing, the Green Wave of Tulane. Gale force winds kept sailors off the water on Sunday cutting this event back to a one-day contest.

SAISA teams were also active in the weekend’s Showcase regattas, the Fiske-Harriman-Sleigh Trophy Coed Showcase at St. Mary’s College of Maryland, and the Truxtun Umsted Coed Showcase at the US Naval Academy. From the St. Marys River, the Jacksonville University Fins and College of Charleston Cougars faced off against teams from MAISA and NEISA. In A-fleet, Cougar sailor Augie Dale and crews Katherine Lounsbury, Carter Cameron, and Oliver Parsons shredded the gnar to a first-place division win over the Polar Bears of Bowdoin College. Waves and spray also greeted the Jacksonville Fins who, like many of the teams facing the windy conditions, took advantage of a deep bench to get several of their sailors into the mix.

Just up the Chesapeake Bay to the Severn River in Annapolis, the Eckerd College Tritons and the USF Bulls faced teams from MAISA, NEISA, and MCISA at the annual Truxton Umstead Regatta, now a co-ed Showcase event. In great racing conditions, Eckerd’s Raz Sayre, Camryn Kennedy, and Liam Farese dialed in a strong showing in A-fleet placing second overall including leading the division for much of the regatta. USF women’s skipper Marina Barzaghi and veteran crew Darby Capellin kept the Bulls in the mix with low finishes and a bullet in the fifth race of the day. With the completion of the Trux, the inaugural Showcase series draws to a close.